Oh, hell. All this narrowing down and singling out. 🙂

Current Favorites (as in, this year so far, I guess is the best way to put it.)

Barbara Kingsolver. She writes literary mainstream, I guess you’d call it — but it feels anything but “mainstream”. It’s full of intense imagery and gorgeous prose, it’s brilliant, concise and pointed and with a clear moral path but utterly non-preachy. She’s just… badass.

C. J. Cherryh. She writes sci-fi and fantasy, equally well: her ability to plan out a series is nothing short of amazing, her characters (human and otherwise) are completely rounded and utterly believable, and her engineering and anthropology background make for some truly inspired worldbuilding.

Okay, one more. Just one. Seriously, I could do this all day.

Clive Barker. He writes — well. Horror, dark fantasy, YA fantasy, and I guess anything else he wants to, because I doubt he’d have a problem skipping over to — historical, or sci-fi, or whatever else he wanted to do. He has an amazing imagination. His writing is detailed, vivid, deeply mystical, image-heavy, and unflinchingly, brutally honest at times.

….Aaaaand part 2! Because I liked going back to childhood influences in my last messing-up-the-intent-of-the-question post. So I’m going to add the author that I think had the most influence on me.

This is one I actually don’t have to waffle on. It’s definitely Madeline L’Engle. (I doubt I’m alone in this.) Her gentle, naïve and all-around-basically-good-human-being characters and coming of age plots had a huge impact on the way I saw the world. Her books all have similar themes running through them: living in harmony, the creative self, forgiveness and taking responsibility and choosing a more difficult path because you know it’s right for you — these things are in every story of hers that I’ve ever read, and I can’t think of a better author to have alongside you when you’re growing up.

…what a wonderful way to go. 😀

I’ve been reading nonstop for the last week or two here: I can’t help it. I’ve got this wonderful stack of books to get through, and I never was much on the concept of delayed gratification, particularly not then it comes to reading material. I still have five or six books to read, which means I’ve gotten through –um, hold on– oh yes: eight.

What I’ve learned from this is:

a) John Varley is still awesome

b) Stacia Kane is one of my new favorite writers

d) K.A. Stewart’s A Devil in the Details is the kickass beginning to one hell of  a series, and

e) Guy Gavriel Kay is still my hero… and I cannot believe I haven’t read Tigana before this. Zowie.

Also, much as one might be tempted to do otherwise, it’s important to do things besides read.

In other news, the new WIP is coming along nicely, if slowly. I’m still in chapter two, but this admittedly glacial pace feels okay for now: I’m working out secondary characters, subplots, relationships, and setting –all things best done in-progress despite an outline– and it feels good, so I’m not going to beat myself up about it. So there.

Writing YA really is different, but fun: I can see now why it’s hard to pinpoint any one or few things that make a book YA (outside of the age of the MC, of course). Voice is such a hard-to-define quality, and yet it really is everything. So I’m messing around, tuning strings, getting the harmonies right, finding the pitch of this book.

Yes, that metaphor went absolutely nowhere, didn’t it, and I don’t care.

So what are you all up to on this fine Tuesday?

Well, it’s hump day, a day which never, in my long working experience, really lives up to its fun-sounding potential. Here I am again, sipping coffee, eating a raspberry-honey-buckwheat farinetta bread concoction I came up with, pretending I don’t feel compelled to check my inbox every ten minutes or so. Ah, the neurotic joys of querying. 🙂

On the plus side, I read an awesome book last night. And I do mean awesome. The kind where you get a bit choked up at the end, reread a few key scenes several times, and heave a deep sigh –yes, one of those, I know I’ve

mentioned them before– when it’s done…

And think, quite seriously, that you might give a body part, and not just a small one like a toe but a big, important one, to be able to write something like that.

(Okay, well, some of you may have less gruesome versions of this wish. Blame it on me reading Stephen King at a very young and impressionable age.)

I know I’ve raved on about Guy Gavriel Kay before, so I’ll be brief: UNDER HEAVEN is an amazing, OMG-why-haven’t-you-read-this kind of book. Set in a fantasy version of China during the end of the Tang dynasty, the story has Kay’s signature sweeping scope and yet –classic Kay as well– the characters don’t suffer for this: they are vivid, heartfelt, and flawed — beautifully drawn, in other words. The world is flawlessly detailed.  The slow sense of inevitability that comes with the coup and subsequent war is wonderful, and the ending is everything you could ask for: desperately sad, bitter, and unexpectedly sweet. I’m going to stay here in vague-land, because I hate the idea that I’m ruining it for anyone — I’ll just say you’re missing out if you don’t read this, and also, that I’d like to be Guy Gavriel Kay when I grow up.

…Because I lurves my books.

And last week I read two extraordinary ones: a hot new YA Fantasy and an older historical fantasy, both amazing in their own ways. The YA was Graceling by Kristin Cashore, and it was one hell of a debut. 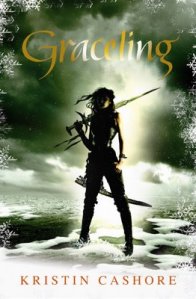 Graceling is set in a wholly fictional world where certain people are born with Graces, gifts that allow them to excel at one particular thing from birth. Cashore’s prickly, ass-kicking protagonist Katsa was born with the Grace of killing, a talent that isolates her completely from her peers and makes her the most feared weapon in the court. But a man with a hidden Grace of his own changes her life when he challenges her to question both her Grace and the purpose to which it has been put, setting them both on a path that will lead them to uncover a conspiracy that threatens five kingdoms. (Yes, I know that was a long sentence: give me a break. It’s been a day.)

What I loved best about this book, aside from the really fantabulous premise, was Katsa’s voice: the story is 100% YA all the way, but there’s this wonderful subtle change in Katsa throughout. She begins as a very solitary, prickly, and somewhat charmingly socially inept young woman, and by the end of the book she is much more confident, more at ease with people and with the Grace she was born with. That doesn’t sound like a huge thing on the surface, but it was, because the voice changed so gradually, keeping pace with the plot the whole way, and putting my writer-hat on for a moment, I will say that’s a freaking hard thing to pull off. Cashore did it with style, sensitivity, and subtlety. Props, I say: props. Pick it up, if you haven’t already. You won’t be sorry!

Book the second was another of the amazing Guy Gavriel Kay’s masterpieces – The Lions of Al-Rassan this time, a historical fantasy based loosely on medieval Spain, and so wonderfully chock-full of detail I’m sure I could read it another ten times (and yes, I do in fact plan to) and discover something new each time. 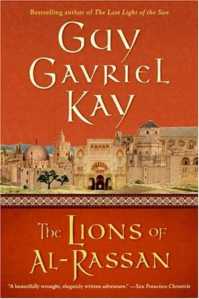 I’m not even going to try to summarize this plot, because there’s just so much going on, and this post is already pretty long. Suffice to say it’s (again, very loosely) about the fight for a Christian or a Muslim medieval Spain, and the storyline is just as sweepingly epic as that (admittedly poor) description suggests. The subject is definitely worthy of epic, and yet Kay tells this story through the eyes of a handful characters, and he does it without losing any of the important pieces– and also without skimping on characterization. Moreover, he does it with such depth and sensitivity that he makes this huge-scope-plot utterly, poignantly human and heartbreaking.

Which is why I love this guy, really. His other books show a similar skill. I’d be jealous, but that would be a little like envying Angelina Jolie for being prettier than I am: I know when I’m a couple thousand miles out of my league.

Anyway. If you’re looking for solid worldbuilding, a complex, tense plot and characters so real they break your heart (not to mention a beautiful tearjerker of an ending), pick this up. And keep an eye out for the movie, which I am kind of freaking out about here. 🙂

So there’s my take. I’d love to hear opinions –have you read these? What did you think?

I stormed Barnes and Noble this past Sunday, armed with $100 gift certificate and a list compiled of all the comments from last week’s help-me-pick-some-books post, and spent a lovely 90 minutes rushing from the SF/F Adult section to the YA section, where many teen girls and I fought over the last copy of The Forest of Hands and Teeth.

…Yes, of course I won: come on. I had 25 lbs and 12 more years of hair-pulling experience over the oldest of them. Please.

And so I’ve spent the last 4 days reading, reading, reading. I had to modify my buys a little, because Michelle Sagara‘s latest installment in the Chronicles of Elantra series, Cast in Silence, was out. So was C.E. Murphy‘s latest in the Walker series, Walking Dead –and both these series make me very happy. Those I read on Sunday, in a blissful state of laziness while sprawled on my bed, propped up by pillows and munching on pistachios. (They were fabulous, if anybody wants to know. Not the pistachios, which are of course ALWAYS fabulous, but the books. Wonderful.)

Next came A Song for Arbonne by Guy Gavriel Kay. I’ve been told I write like him, so it seemed like a good idea to read something by him. And, um, damn –I wish I wrote like him. It’s been a long time since I picked up a high fantasy book that made me as happy and sad and overall impressed as this one did: it’s sweeping the way epic should be,  but still wonderfully heavy on characterization, which is pretty much my favorite kind of book. Kay writes in an achingly emotional but not soggily sappy style that is just gripping. I’m a total sucker for that stuff.  I’m going to use my Borders gift card pretty much exclusively for more of his books, because wow.

And last night I started The Forest of Hands and Teeth, by Carrie Ryan, and dammit, I stayed up an hour later than I meant to. I still have 2 more to go, and then it’s back to the bookstore for more.

Read any new books lately? Tell me about them!