Yes, it does look a bit different around here, doesn’t it? I’ve hit that 4 month theme-change time, I guess. I used to do the same thing to my furniture (and may very well again; we haven’t really lived in this house long enough for me to start rearranging things). Sometimes a new look is what you need to shake things up a little.

Again, nice and ridiculously specific. LOTR seems like too easy an answer, and to be honest, while I love it and it was a huge influence on my reading and writing preferences, I don’t find it as riveting as, say, Jacqueline Carey’s Kushiel series.

I’m sure if I look back through all the posts I’ve put up since I started this blog, I’ll find I’ve plugged this one before, but whatever: it deserves it. Patricia McKillip is an amazing writer, the kind who hits the metaphor out of the park every time, isn’t afraid to pepper every scene with so much vivid imagery it borders on the surreal,

and still manages, while doing all that, to tell a hell of a story. The Riddlemaster Trilogy was one of her earlier works, and unlike most of her later writing has all of the above and also an abundance of angst (and we know how I love angst), plus a scope that equals LOTR, as far as I’m concerned, and yet it’s a totally character-driven story.

Pretty much everything I could ever ask for in a set of books, that is to say. I could give a more specific description, but I don’t want to ruin it for anybody. Suffice to say, if you like all the stuff I listed above, you won’t be sorry you read this set.

Well, there’s at least one good thing about turning 31, I’ve found. I may not like getting older (it’s not such a big deal, really, but I suppose I’m bracing for later in life by getting a good sulk on now), but I do like parties, and I do like presents.

Anyway. Since my family knows me well, I got a) a genuine scare-hell-out-of-me surprise party, and b) a mountain of gift certificates to Barnes and Noble.

Picture me rubbing my hands in gleeful villain-style here. There are a lot of books I’ve been wanting to get, that I haven’t gotten because walking into a bookstore and buying a pile of books isn’t really an option when you’ve got a mortgage, car payments, school loans, and oh, a powerful need to eat sometime this month, etc.

So I didn’t waste any time, as you can see… 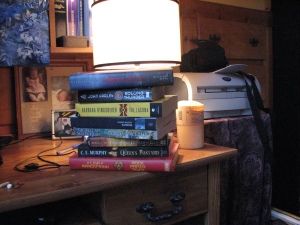 Shown: The Demon’s Covenant by Sarah Rees Brennan (WOW, is all I have to say), Rolling Thunder by John Varley, Barbara Kingsolver’s The Lacuna, Cherie Priest’s Fathom, The Bell at Sealey Head and The Forgotten Beasts of Eld by Patricia McKillip, C.E. Murphy’s Queen’s Bastard, and the amazing Lisa Brackmann’s Rock Paper Tiger, which I’ve been wanting to get for months.

Not shown (because they’re strewn over the rest of the house, where I left them after reading them, that is to say) are: Sandman Slim by Richard Kadrey (tweeted enthusiastically by an editor I follow, there’s that for social media as advertising), A Devil In the Details by K.A. Stewart (already read, and holy hell, GO GET IT NOW, because it rocks), and Stacia Kane’s Unholy Ghosts, which might be the best worldbuilding I’ve ever read in UF, plus is full of kickass and angst).

And I have four more headed my way as I write this. Can a girl be more satisfied?

So here I am, happily occupied for– oh, at least a few weeks. I’m going to have to keep reminding myself to write: I seldom have such a multitude of distractions to tempt me away from that, so I guess this will be an exercise in self-discipline. (Or a failure of it.  Further bulletins as events warrant.)

Sadly, someone is less than pleased with this state of affairs: 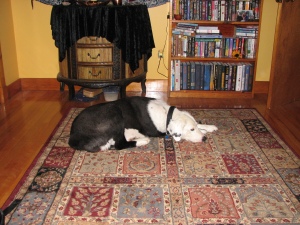 For those who haven’t, or who think Twitter is either a sound birds make or a website for people who don’t know how to use Facebook, a hashtag

is a way of marking a post as part of a topic– and sometimes, like during crises, major events, or celebrity scandals, the number of posts on a particular topic can reach astronomical proportions, and can also reveal an interesting range of opinions, rumors, and news.

(Yes, this is my argument for the awesomeness of Twitter, in a nutshell.)

Well, last night one of those topics was about books. Susan Orlean wrote a short post about The Assassination of Jesse James by the Coward Robert Ford and added the above-mentioned hashtag, and it caught on. There are tweets out there about the book that first made someone cry, laugh, stay awake all night, try to write something of their own, believe something differently or more deeply, live differently– you name it, it’s out there, doubtless by the thousands. I’ve been skimming these  –it’s impossible to read them all; I meant it when I said there are thousands– and feeling pretty damned good.

Stuff like this reminds me that in the midst of all the new media, the new prices, the sales wars, the Black Octobers and the mournful eulogies being pronounced over the publishing industry… that it’s still about stories, and stories aren’t going out of style anytime soon. The fact that so many people have so much to say about books, books, books, gives me nothing but hope.

It also reminds me I have a lot to be grateful for myself. There are plenty of #booksthatchangedmyworld I can list. I’ve been reading  for a long time — some 28 years– and I owe a respectable chunk of the self I’ve created over that time to the things I’ve read. So, without going on forever, I thought I ought to put a few (just a few) down here:

Roll of Thunder Hear My Cry, by Mildred Taylor. I read this one when I was 7, mostly because my mother dared me to read a “thick book”. About ten

pages in I was hooked: not just because it’s a good story and a beautifully written one, but because I was learning about the American south after the civil war. I was learning what it was like to be black around that time; what it was like to be treated differently because of your skin. This may not sound earth-shattering to you, but for a kid living in an extremely homogeneous part of the country, it was a revelation.

Dune, by Frank Herbert. Read that one when I was 14, I think, and I can thank my uncle Rich for introducing me to it. It was probably the first real sci-fi book I ever read, and I haven’t looked back since. It also had a pretty heavy influence on my views of humanity. I don’t think I’ve lost much of the cynicism I gained in those pages since. 🙂

The Drawing of the Three, by Stephen King: I read this for the first time when

I was 12 –I think I inadvertently stole it from my 8th grade English teacher (sorry, Miss Rough, but thank you). Aside from being an excellent story by King at the height of his skill, somewhere between drama, horror, morality tale, sci-fi, and Western, it was the first time I read a piece of genre fiction and started to wonder how the writer accomplished certain things –and to wonder how I could do the same.

Prodigal Summer by Barbara Kingsolver. If you’ve read this one, it needs

no explanation. But what the hell, I’ll give one anyway.  It’s three flawlessly interwoven stories all aiming toward the same theme(s). Kingsolver manages to impart a strongly-held social/political commentary without sounding preachy or getting in the way of her own stories, writes her characters unflinchingly and yet with such wonderful sympathy, and oh, yes, also has some of the most beautiful, concise, and flowing prose I’ve ever encountered. Many times I’ve read something and thought I want to write like that: when I read Kingsolver the wish is more along the lines of I want to think like that.

Song for the Basilisk, by Patricia McKillip: This was the first book of hers I

read, and outside of being amazingly beautiful, it was the first time I read something modern where the author wrote unabashedly lyrical, metaphor-peppered prose. That’s my natural bent, but modern genre fiction is often geared toward more concise, plain language, and I was, at the time (my freshman year of college, if you’re wondering) beginning to think that maybe there was just something wrong with me. If I don’t write nearly as well as McKillip, well, now I know what t

Bridge to Terabithia, by Katherine Paterson. I must have been 6 or 7 when I read this one, and it stayed with me for several reasons. All my angsty, grief-filled end scenes can probably be laid at the feet of this book.

t not at all least (yes, I know, I promised brevity and completely failed that one, didn’t I?) I’m going to break form and just say anything at all by Madeline L’Engle. Anything. I’ve read and reread all of her books, starting when I was 6 and going right up to today, and her intelligent, innocent, serious and sensitive narrators have carried me through the last 25 years. I can honestly say that I’d be a worse writer if I hadn’t taken so many of her lessons to heart.

And there I’ll stop, really — though I could list a few hundred more, to be honest. Books have been, and are, a big part of my life.

Clearly I’m not alone: there have been over 400 new tweets under the #booksthatchangedmyworld hashtag since I started this post. 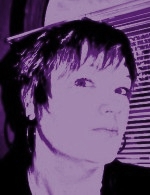